At the New Year many make resolutions – join a gym, spiff up the wardrobe, take that vacation. The New Year is a good time to make Mascot Resolutions for 2013.

This was brough home to me when I got an email from Dave Raymond, the Mascot Doctor. He got me thinking about resolutions for mascots and the mascot program.

Get in touch w/ AvantGarb. We will work with you on your Mascot Resolutions for 2013; mascot design, creation, production cleaning, repair, and maintenance.

….or we will connect with one of our Lovely Collaborators like, Dave, the Mascot Doctor and the original Phillie Phanatic  He will work with you to create a dynamic, mascot program.

We wish you health, happiness and wealth

Your mascot mavens at AvantGarb 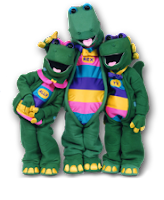 We have been riffling through Rex pattern pieces labeled:

This is mascot evolution. All of the patterns are drafted at our studio out of heavy, brown Kraft paper. Apparently the eyelid for Rex – the smallest pattern piece of all – is the one pattern piece that has remained the same!

We have been creating and re-creating and re-imagining Rex , the mascot for the Children’s Museum of Indianapolis since the early 1990’s. We can trace the evolution of Rex through the patterns.

What has changed on Rex over the years?

The size of the head has changed, the size and curve of the tail, the color of the tongue, the placement of the nostrils, Many of the changes have been for the comfort of the performer. Some have been carefully considered and planned, some have just happened in the constructing – when a hint of sparkle seemed just right.

The 3 toed foot looks the same from year to year, but the inner mechanism of the shoe have changed considerably.

As in all things – it’s not just what you see on the outside. The inner engineering and workings of a mascot are just as important as the outside appearance.

Pattern pieces migrate, and don’t always get back to where they belong. So we may have a Dinosaur sleeve from 1998 that looks wrong for a mascot is 2011, yet none of the sleeves after 1998 can be found.

Through all of the changes and manipulations in patterns & engineering, the essence of Rex remains the same. Rex requires yards and yards and yards of custom-dyed Muppet Fleece – dyed to a special “RexGreen” by our dynamite dyer, Robbie Stanton.