There’s a new mascot in Mascotland. His name is Gritty. He’s caused a stir and we’ve noticed. So has everybody else. He is everywhere. He’s on TV, he’s all over social media and he’s on the tip of everybody’s tongue Gritty is the new mascot for Philadelphia Flyers Hockey.

At first glance he seems like an pretty unusual mascot.

We first looked at him and said, “Huh!?”

Since Gritty arrived on the scene, we have all talked to each other about, well, Gritty. There is a whole Gritty photoshop movement on twitter ( and his twitter feed is worth a read). He’s hung out with Jimmy Fallon and Ricky Gervais. He’s been on GMA.

The big, shaggy orange guy is doing everything a mascot should do. He’s bringing people into the house. He’s the Flyers most ardent fan.

He’s adorably, socially awkward and he  mostly l-o-o-o-o-o-v-v-v-e-s everybody inside  the arena and out.

Gritty, the new mascot for Philadelphia Flyers Hockey is BRILLIANT. He’s bringing new fans to hockey and he’s introducing neighbors to each other. He has already made a Big, Big Impression because he is a BIG, BIG mascot.

Gritty has no boundaries. He reaches out to everyone and we are all reaching back.

Need a mascot? Get in touch. Our relationship with the Grand Rapids Griffins Hockey began with the feet. Griff’s mascot feet were old and tired, and the performer wasn’t happy. He got in touch with AvantGarb.

We made the Griff new feet and the performer was very happy with the feet. We gained a wonderful client.

At our mascot studio, we have spent hours fine-tuning the inner structure of the mascot foot. Next to sculpting and building the head, making feet/shoe/boots for a mascot is the most complex. There are buckles and straps and foam and leather and soles that have to be cut and there are doohickies and various types of elastic and webbing and something called “cloud”,

Soon we were building the whole Griff mascot from the wispy head feathers to the silver wings and…. the feet! The Griffin is a mythological character. He is part eagle, part lion. This means we got to make wonderful silver wings put hints of feathers on the Griff’s head and give the guy really furry leg and feet. The Griff is the King of the Beast and the King of the birds, so we muscled him up a bit too.

For us, muscles are foam, foam, foam, foam. All of that foam is covered in athletic mesh. We use a foam that is designed to have water flow through it —-so its washable and it is tough.

The Griffins were our first introduction to the world of hockey. We’re big fans. 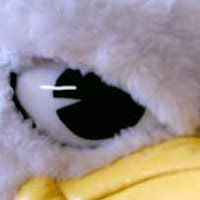 …okay, we love the Griff—the mascot for the Grand Rapids Griffins Hockey.

Isn’t he the handsomest Griffin on skates?