Why get a big bundle of fuzz and foam with a big head?

1. Mascots are media magnets. No matter how good-looking and socially savvy your marketing people are, they will not get the attention a mascot gets by just showing up. 2. You posted a photo of your kid (or your mom, grandma, boyfriend, uncle) dancing with a mascot. You’re probably going to buy the product, go to the game, consider the college, attend the event.

3. You have an amazing, custom-made mascot. Your competition has a brochure. ‘Nuff said.

4. A mascot is a diplomat, your representative at events that matter in the community like parades, charitable runs, festival. You can probably name a dozen event where a mascot’s presence would enhance your brand.

5. When a mascot shows up, everyone knows they’re gonna have fun. Marketing and the revenue pool is much bigger than just the mascot. When people wear your image – or sleep with your mascot —I mean the snuggly, plush toy of your mascot!!!! —-you have made a lasting bond.

9.  Mascots promote goodwill for your brand because they bring people together in a community around the mascot. It’s a kind of accidental Flash Mob community. Mascots are the true warm fuzzies of marketing.

Join the fun!  Let’s talk about your mascot. A New Book Mascot for the Indianapolis Library The Indy Library wanted to update the mascot. They wanted the big book to be a bit smaller so it could be more easily transported —and they wanted a few other changes.

The Library had a book mascot, named Booker, for about 20 years – it had been remade and duplicated a few times over those 20 years. Booker was always a popular mascot.

We designed a thoroughly modern book. New Colors for Booker the Book

The original Booker was made from the primary colors, red, yellow and blue. The Library wanted this one to use some of the other colors now used in the Library’s logo.

They opted for spring green, aqua and orange.

Booker is a very jazzy book! Booker has some pretty swell shoes and a nice hairdo, as well!

What do you think of the new library mascot? We all take selfies

…and we take selfies with branded, custom mascots. We take selfies with people, places & things that we like. Our selfies become part of the family & friends memory. They get momentum in the the social media universe.

When we take selfies with mascots, that’s a pretty compelling form of marketing. The mascot becomes part of the the lore people share with family and friends.

Taking selfie with mascots is, indeed, a thing. It’s one of the many reasons mascots are such fabulous marketing ambassadors.

Selfies with mascots is a unique coming together of customer & brand. The mascots have become part of the family. One of the friends.

Send us your selfies w/ a mascot! According the Alpha Xi Delta, AvantGarb is the”Glam Squad” for BetXi Bear. Her belt matches her shoes. of course! – and her shoes are yellow, patent-leather BetXi is ready for any occasion. Getting the details right is what AvantGarb does best.

We matched the fabric to theAlpha Xi Delta’s colors.

There is no fabric that is durable enough and has polka dots big enough for a socially active mascot like BetXi.

The artisans at AvantGarb cut out polka dots and stitched them onto blue fabric. We added light blue 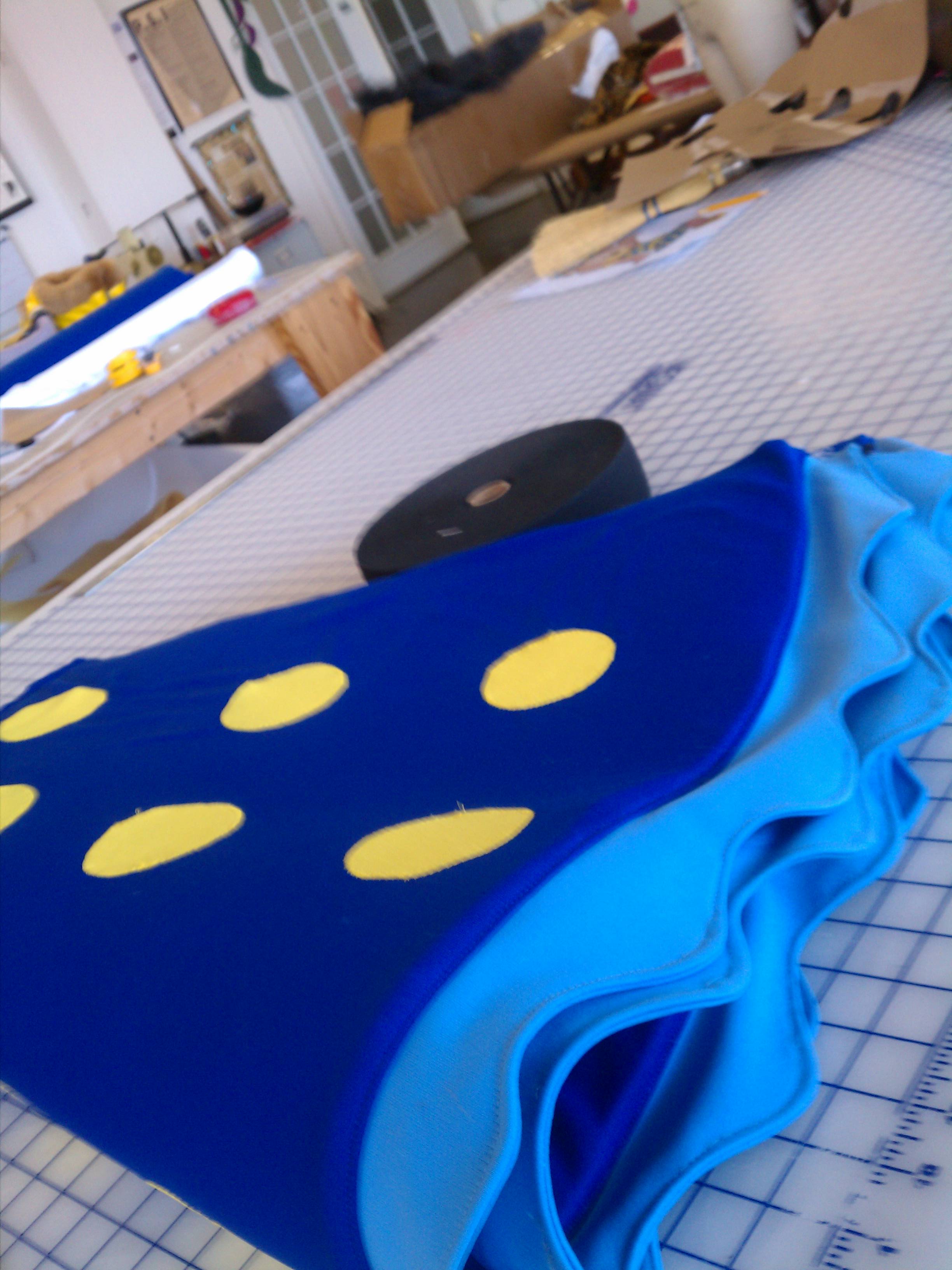 trim to the bottom of the dress and made that giant bow!

BetXi’s first appearance was at the Autism Speaks Walk in Indianapolis. BetXi travels from campus to campus promoting Alpha Xi Delta and their good works.

BetXi is classy, stylish and she has a big, big heart.

We live in a world of fuzz, fluff, foam and googlie eyes at AvantGarb. Here in MascotLand, the mood of the studio and ease of collaboration rules. That’s the only way we can get to good mascot design – to be the best mascoteer engineers we can be!

When designing and producing a new mascot, we gather together to ponder a seam, contemplate a collar, engineer and re-imagine the interior structure. We are mascoteer engineers. It’s called, Mascotology. Making a big belly requires a some foam that is covered in athletic mesh and stabilized with hoops – they look like hula-hoops, but are custom made to match the contours of the belly.

The mascoteers at AvantGarb work together on all aspects of the mascot. The body needs to work with the  head. The legs need to fit into the shoes….and don’t even get me started on the hats! We’re big on Big Millinery!

Rocket science accuracy is sometimes part of the engineering.It turns out, putting on and taking off (for easier shipping) a couple of Really Large Antenna, on TiVo, is a very complex bit of engineering.

We are, after all, great character builders – Mascoteer Engineers.