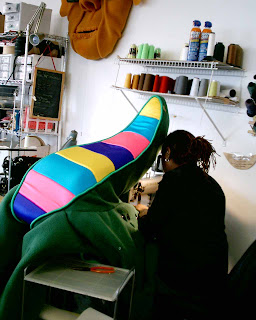 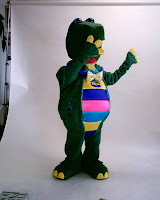 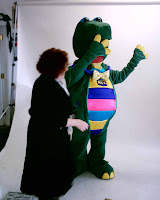 Many parents have told me that their children beg to go to the museum so that they can wave a flag on the Rex parade…..and be led out of the museum.

The daily Rex Parade is the gentle way to lead children and adults through the Children’s Museum and out the door at closing time.

We are the ones who make the big, rainbow bellied Dinosaur.

Rex is a mascot engineering miracle.

The law of gravity is a law that usually wins. Rex’s tail defies gravity. It takes a lot of engineering to defy gravity. 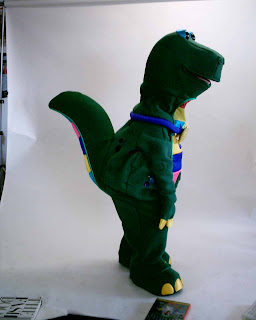 The Mascot Studio – Location, location, location!
AvantGarb is in the coolest building in the United States.
Our building, The Stutz Business & Arts Center is an old, car factory. Stutz Bearcats used to be made here—in our studio, you can see fragments of the old factory workings –lotsa pipes and wheels controlling the steam heat. The building is warm in the winter and it’s cool in the summer —well, the building is always cool is the coolest sense, if ya know what I mean!
It’s good for the soul, and really good for business to like the place you work in…..and we like the where we work. The location, and, of course, the work!!!!

AvantGarb has been a growing, productive business for a really long time.
I started AvantGarb in my Berkeley, California garage when my youngest daughter was about 3 months old.
Month after month AvantGarb has made a profit and those dollars have increased through the years.
AvantGarb is a real, ongoing operation.
Even though we get grow each and every year, get more marvelous clients, are able to hire extraordinary people, and have moved to jazzy new digs. Even though I’ve been paying my mortgage, clothing my children, going on vacations, buying shoes, getting my hair done and my eyebrows tamed, I still think, it could be over tomorrow.
This is crazy thinking.
When I am sitting with a curved needle, stitching yellow muppet fleece to green fur, I have taken to counting my blessing.
Here are some of them:
I am truly blessed. I have imagined my life, and it became real.
I suspect the story of other small biz people is similar. 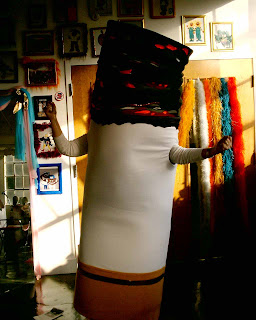 See the cigarette, check out the Great American Smoke out video. This Cigarette is one of ours.

When we got the job to make the really, really big, wearable cigarette, I had to go out and buy a pack of cigarettes. We needed to custom-dye the filter fabric, and needed a color sample.

Then, we had to light cigarettes so that we could understand how the ash bent when it burned.

This was a wonderful project. Making ash on a giant cigarette from fabric, sequins and open cell, charcoal, filter foam is a pretty swell project. 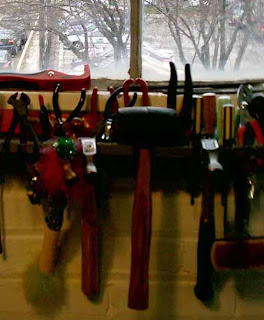 In my tool rack, we have bunches of hammers—ok, 2 or 3 and a mallet, but in the swirl of mascot-making hammers, screwdrivers, scissors, rulers get lost, hide under fur, get involved w/ the velcro, sidle up to the sequins.

Several years ago we made some Glamor Hammers for special, hard-working clients. They were hammers, with spray painted gold heads, bunches of sequins and feather boas. One of the hammers found its way to the tool rack. For a few months, the Glamor Hammer was the only poundy thing we had. Its pretty, but not tough—but it still pounds, I think. 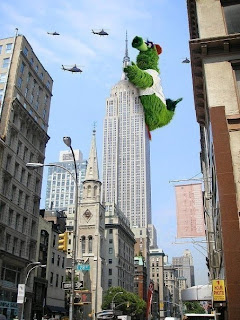 Phanatic in NYC
I’m torn. Who to root for in this Wold Series (or as my father calls it, the World Serious), the Yanks or the Phillies?
I grew up in NYC, got married in NYC, my first daughter was born in NYC and I went to my first game, a Yankees game, in the Bronx!
Before going to my first Yankees game, I had been to bunches of plays on Broadway, Off-Broadway and Off-Off Broadway. I had spent hours hanging out with friends at the Museum of Modern Art and I had gone to see art & performance pieces in galleries in SoHo (way back in the day, when there were galleries in SoHo).
In NYC, there is a sense that keeping track of the Art Scene is like watching a contact sport. There is an ever-changing roster of players, there are minor leagues and major leagues.
When I started watching the Yankees, I saw them as characters in a play, or an art performance. I have maintained that Sport-as-Art-Performance sensibility.
Oh gosh, I can sense you sports guys cringing!
…and I make mascots.
Who do I root for?
The Phillies have a mascot. The Yankees don’t.
Both teams have great characters and great costumes. Both teams have a sense of drama.
Hmmm…hard to say.
It’s a great World Serious.
« Previous Page
Next Page »